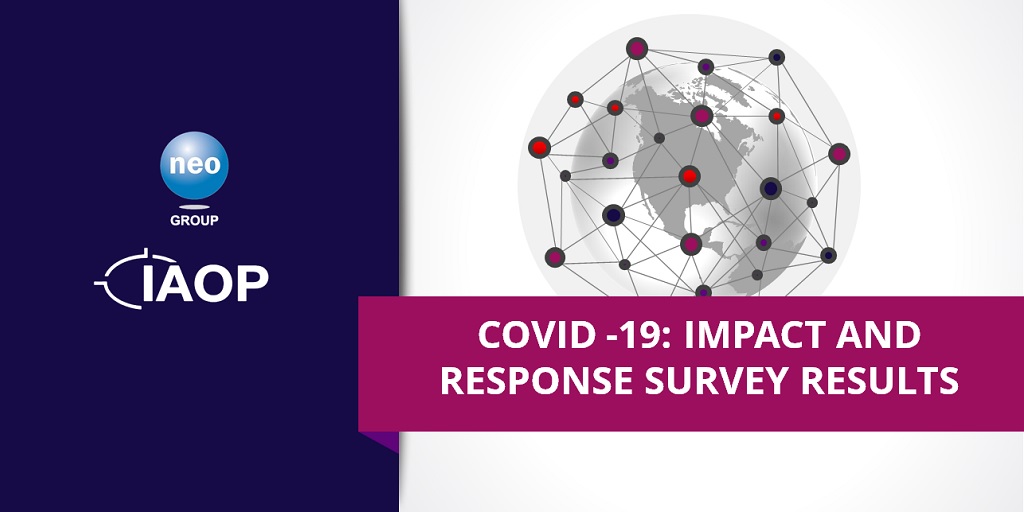 Clearly, COVID-19 has had a significant impact on the global economy over and above its impact on public health and on daily life. Supply chains have been affected and buyers and service providers around the globe have been compelled to develop short-term workarounds while they also consider how to build greater resiliency into their globally sourced operations for the future. IAOP and NeoGroup partnered on this survey of the Global Sourcing community – buyers and service providers – to gain a greater understanding of the impact and response to COVID-19 and to launch a broader discussion on recovery.

The survey was live from April 20th until May 8th.  While the majority of responses were from organizations headquartered in North America and Asia, we received 91 responses from global sourcing leaders located on every continent except Antarctica. Approximately two-thirds of the respondents were service providers.

We found striking similarities between the responses of buyers and service providers. For instance, approximately, one third of both buyers and suppliers, 28% and 33% respectively, experienced greater than a 50% disruption of services.

ROOT CAUSE OF DISRUPTION

One area where buyers’ and services providers’ responses differed greatly was in their responses in their confidence in their ability to maintain the current level of service and prevent any further deterioration to service quality.  A overwhelming majority of 81% of the service providers said they were either “confident” or “very confident” compared to only 50% of the buyers. At the other end of the confidence spectrum, only 2% of the service providers were either “not confident” or “not at all confident” by contrast to the 36% of  buyers who expressed low confidence levels.

Regarding predictions on the timing of a full recovery, no clear consensus view emerged.  Responses to the expected time frame for a return to steady state by both buyers and service providers ranged from less than a month to exceeding six months.

Both buyers and service providers plan to undertake a combination of various actions as and when the crisis abates. These include:

Buyers responded that Mexico, the US and India were most stable, whereas LATAM, the Philippines and China were least stable. Service providers on the other hand expressed mixed responses in terms of stable and unstable locations.

A majority, 64% of buyers engage in a multi-sourcing strategy leveraging their own captive centers as well as third party providers with 22% dependent on third parties only. Over a third of the buyers felt their captives were better prepared and did a better job in minimizing disruptions as compared to their service providers, while an equal number responded that their third parties handled the crisis better than their own captives. The remaining buyers (28%) were unsure. As far as their level of satisfaction with their service providers’ response to the pandemic, 57% of the buyers said they were either “satisfied” or “very satisfied”, 29% were “dissatisfied”. The remaining 14% were ambivalent on their level of satisfaction. Asked if there were any service providers they would like to recognize for their excellent response and service levels during this crisis, buyers named TCS, Accenture, Capgemini and Infosys.

Thank you to all the buyers and service providers who participated in the survey.

The Distributed Agile Paradox: How To Overcome The Challenges
March 13, 2020

What Good Third-Party Governance Looks Like: A Neo Point of View
November 27, 2019